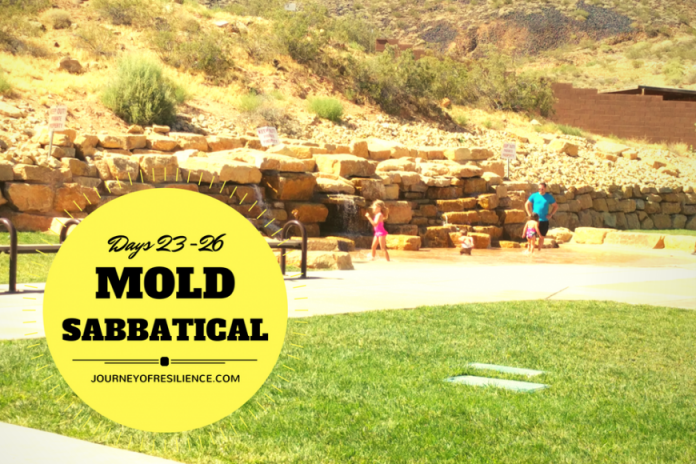 We had a few days with no therapy after Jotham’s anaphylactic reaction, and also had an appointment with a doctor that evaluated Jotham’s structure, nerve function, and muscle tone. He gave us some interesting information, including the fact that when the surgeons sewed Jotham’s lesion closed, they sewed certain muscles together so tightly that the right side of his hip is stuck cock-eyed. This makes Jotham’s right leg shorter than the left in certain positions. It’s possible that as he grows, the muscles will adapt and allow the hip to sit properly.

The doctor also showed me how to help Jotham’s body circulate the spinal fluid that gets down to the sacrum. I gently move each leg a few times while touching the sacrum, which is a movement that would happen naturally with a typically developing child.

Micah flew in for Father’s day weekend, but it was a very quick visit. He didn’t get to the campground until 3am Saturday morning (due to traffic in Las Vegas for a music festival), and he left around 1:30pm on Sunday. We spent most of Saturday discussing things with the practitioner overseeing Jotham’s therapy, and then had a few hours together as a family.

On Father’s day, the kids gave Daddy some honey sticks and peanut butter cups they chose from the bulk bins at the grocery store. They wanted to give him a balloon, but were ok skipping it since he wouldn’t be able to take it home on the plane. They wanted to take him out to the Black Bear Diner in St George for breakfast, but we decided to make it a lunch date so we could get to church on time. We didn’t get to enjoy our meals all together – Micah had to leave after appetizers, and got his meal to-go. My BIL had to do some errands in Vegas, so he was very kind to take Micah to the airport.

Jotham came down with a virus on Saturday, which lasted about a week. Nighttime was the hardest, and since there was also a heat advisory with temperatures around 115 degrees each day, we stayed at my sister’s townhouse a few of the nights he was sick.

When the extreme heat hit southern Utah, we couldn’t be outside most of the day like in the weeks prior, so had to get creative. We spent time in the mall, Barnes and Noble, the clubhouse in my sister’s townhouse complex, and a couple libraries. Most of the indoor environments were not free of mold and air fresheners, but we seemed to handle them ok with minimal symptoms.

A few days before departing Utah, we booked Southwest tickets to fly back midday Tuesday, June 27th, and I began planning the details for packing all our stuff into 6 bags. We prayed for people to be available along the way to help, and God answered with a yes over and over and over. All things considered, the trip went very smoothly.

I returned the rental van 3 hours before our flight departure was scheduled, and we were going non-stop from that point until sitting down in our seats on the plane. It takes me quite a bit longer than the average person to accomplish things, mostly due to the added cares Jotham needs (bowel and bladder needs, eating slowly, etc), and by the time we got some lunch and arrived at our gate, they were giving the last call for family boarding. We walked right on the plane (which is a job in itself with a portable oxygen concentrator/POC to wheel down the skinny aisle). They require the POC be stored under the seat furthest from the aisle, so wiggling 3 little people, myself, a concentrator, and 4 carry-on bags into our row is not a very quick process. Thankfully the Southwest stewards and stewardesses are gems to work with, and this flight was no exception.

We landed at Midway airport around 6:30 PM CST, and met Micah on the other side of security. When we claimed our checked luggage, one parcel appeared to be sliced open and half the contents were missing, including most of Toby’s new birthday presents. It was a cooler that was taped shut very well. We’re assuming TSA cut it open and searched it, but didn’t tape it closed when they were done. After obtaining the proper paperwork to make a claim with Southwest to replace the presents, we started for home.

3 Things I Wish I Knew When Hydrocephalus Took Us By...

Which Air Purifier Do We Use?